What is the Book of Common Prayer? 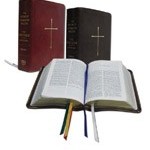 The services of prayer on this site continue the work of daily praise set out in the Old Testament.  Morning and evening were the usual times for daily public prayer, both in the Jerusalem Temple and in the synagogues of outlying villages.

The Church continued this practice of beginning and ending the day with brief prayer, centered around the singing of the Psalms of David.  By the second century, most Christian communities had linked these traditional hours of prayer with reading the Bible aloud.  It was typical to read through the majority of the Bible in a year.   This form of corporate praise became known as the Daily Office.

During the early Middle Ages, monks and nuns kept this practice alive and elaborated it into a scheme of seven services of praise for every day of the year.  By the late Middle Ages, a fourth of Western Europe prayed the Office every day.  Though the services were in Latin, the prayers were understood by most people, even if the Scriptures were not.  The Daily Office taught people what God had done for them and let them respond with praise.  It formed them as Christians.

By the early sixteenth century, there was a booming industry of prayer books and Bibles in people’s native languages that lasted for generations.   The two most influential books on the English language came from this period:  the Authorized Bible of 1611 and the Book of Common Prayer, first published in 1549.

The Book of Common Prayer, or Prayer Book, is largely the work of one man, the Archbishop of Canterbury, Thomas Cranmer.  He condensed the medieval system of seven daily services to two, and simplified the scheme of Bible-reading.  Cranmer was an artist with words and a revolutionary, but he shared two convictions with his medieval predecessors that bear mention:

First, praise is a public act.  Speaking God’s praise into the world changes the world as well as those who utter the praise.  Second,  The Bible is a public document to be read aloud in meaningful sections, not locked in a bedroom on the nightstand and drained off at the rate of a sentence per day like medicine.

The services you hear, through the Cradle of Prayer, use the 1928 Book of Common Prayer, and the lessons (appointed Bible readings) come from the 1611 Authorized Version of the Bible.  Though they were assembled for members of the Church of England and those Churches which come from it, they belong to all people.  The Daily Office is the inheritance of all Christians, and the books we use to pray the Office have shaped nearly every utterance of the English language.

It is the Christian conviction that common things bear holy things.  We hope you find it so in these prayers and readings.